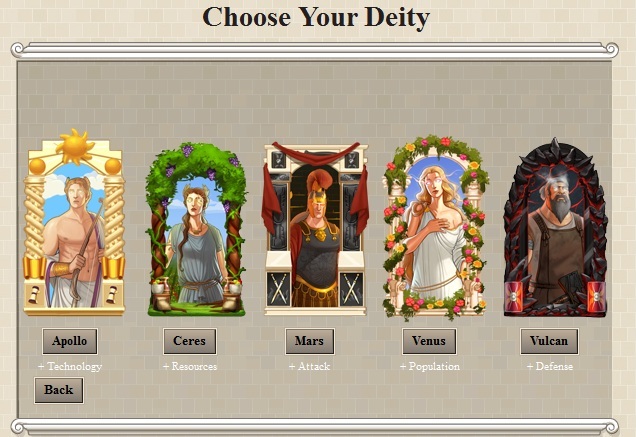 When you start a new game on a server, you will be taken to the deity selection screen above after choosing your avatar. These are the descriptions of each deity taken from the game:

- The sun deity, Apollo increases the benefit from your research. Researching technologies can improve building, attacking, transporting and more.

- The deity of growth, Ceres increases your resource production. More resources allow you to build, train and research more items.

- The deity of war, Mars boosts the attack power of your troops. Powerful troops will help you expand your empire and conquer far off-lands.

- The deity of love, Venus increases your max population. The larger your population, the more citizens you have to train as soldiers or work in the fields.

- The deity of the forge, Vulcan forges stronger defenses for your troops. Strong defense increases the survivability of your troops, helping you win battles.

Normally, Apollo is the most popular pick on new servers. The only way you can change your deity once you've started playing is by using specific items which are sold for gold in the "Shop". You might also be able to win these by playing Fortuna's Gamble but this hasn't been confirmed.

These items are sold under the Miscellaneous tab in the Shop:

- JUPITER'S BLESSING: Change your deity and keep your temple at its current level. (Regular price: 250 gold)

Retrieved from "https://gloryofrome.fandom.com/wiki/Choosing_a_Deity?oldid=5139"
Community content is available under CC-BY-SA unless otherwise noted.